How to… interior photography

How to… interior photography

Are you interested in interior photography but are not sure about the right equipment? Why don´t you try your mobile´s camera? You can achieve astonishing results with it. Try it out before going the next step and purchase professional gear!
Whatever device you use for shooting a room or interior design elements, here are a few rules to make your photos look professional and stand out.

A vase with flowers, a small plant, a bottle of wine and two glasses on a table can make a big difference. Whatever effort you want to make in styling the room beforehand, make sure that it is tidied up and textiles like blankets are flattened out (unlike in my pictures below 😉 ). You might also angle a chair a little to make the room appear lived-in.

First and foremost, whether for real estate photography, landscapes or nearly everything else, getting your shot level is paramount.
I am not only referring to the left-right angle of your camera, but also to that the camera should neither point up nor down but be exactly horizontal.
You will immediately recognise that your left-right camera angle is not horizontal, as the horizontal lines in the real setting (eg. joints of walls and ceiling or floor, table edges, shelves, etc.) will appear inclined in your display. 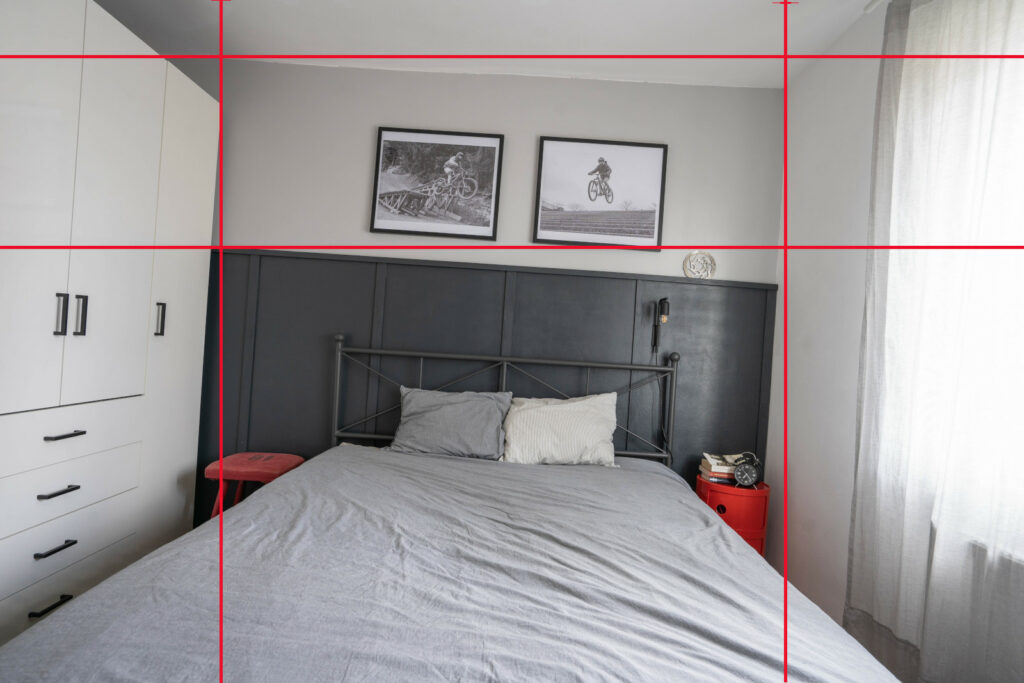 The same applies if you point your camara up or down – in this case the vertical lines in your picture appear tilted. 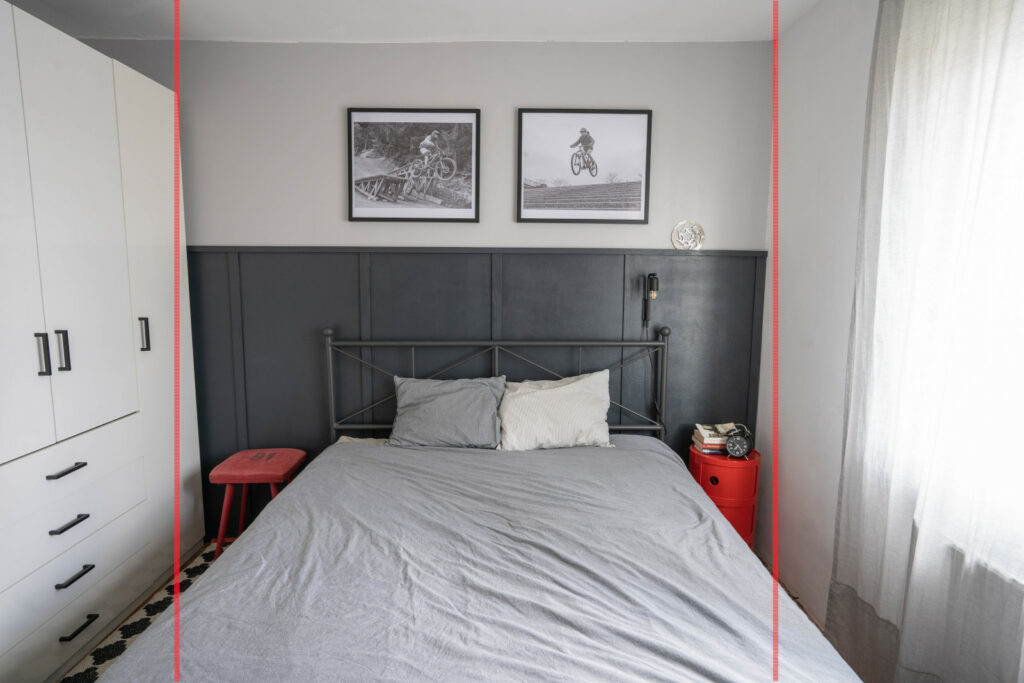 So, if you want to adapt what is to be seen in your photo you can change the angle of your lens, move the camera up or down or right and left but don’t tilt it.

There is an additional important point to take into account when shooting a one-point perspective photo. One point perspective means that the camara is pointed in a 90° angle to a wall or another plain surface. Here it is crucial that you make sure the angle is truly 90°. Turning the camera only a few millimeters left or right leads to inclined horizontal lines in your image.
In the picture below the camera was level but turned to the right, meaning it was not in a 90° angle to the wall. 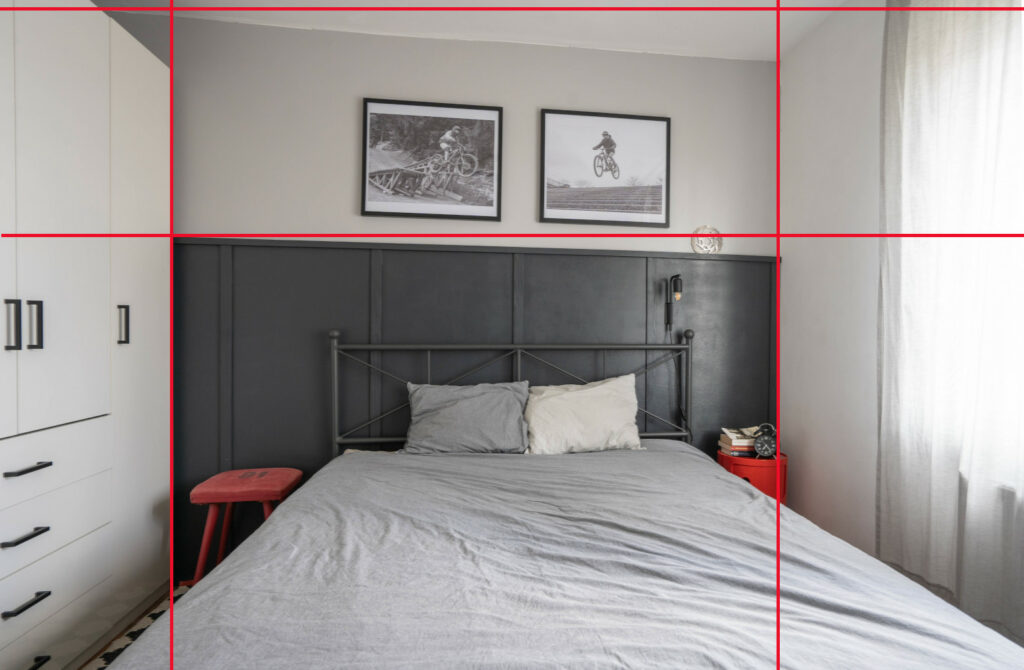 Sometimes we tend to go too far with the use of the wide angle. Shooting at a too wide angle can lead to distortion, which means that either everything is bulging away from the center (as with a fish-eye lens) or leaning into. Furthermore, the picture taken shows a space which is quite far away from reality and, depending on the purpose of your pictures, this may lead to disappointment (eg. a customer is expecting a spacious room, but the room is actually tiny…)
Space permitting it, it is better to move backwards to capture a complete space, than using the wide-angle modus.
However, if you cannot avoid shooting at a wide angle there are apps available with which distortion can be corrected afterwards. 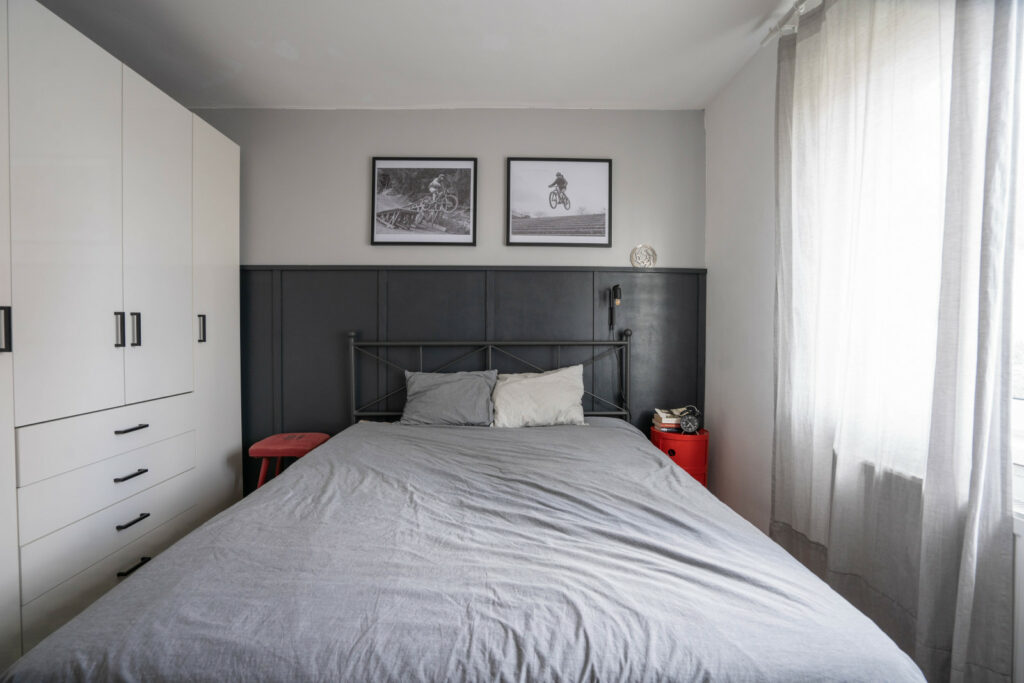 Generally, I would recommend placing the camera at a height of approximately 150 cm or about 50 cm above the main surface of the room. Take a piece of furniture as reference. For example, a double bed in a bedroom or big table in a dining room can serve as reference surface from which you add 50 cm for your camera height. In kitchens I would make sure the camera is slightly higher than the countertop, avoiding seeing the lower side of the cabinets.
If there is a pendant light to be seen in your photo make sure that you show suspension point so that it is somewhere connected.
Below photo was taken at a too low camera height. 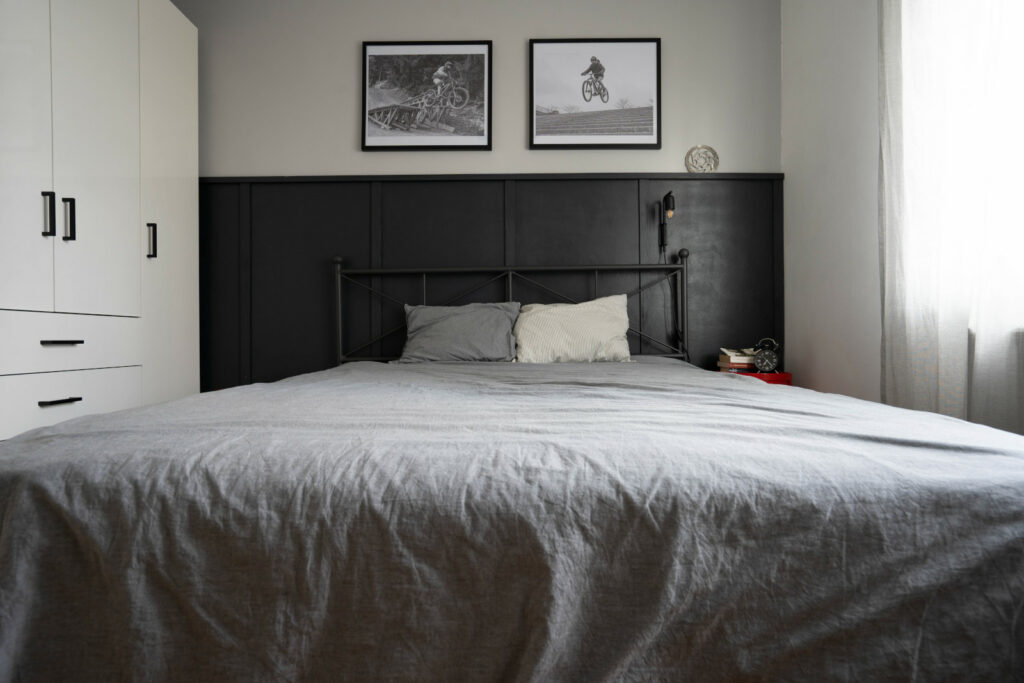 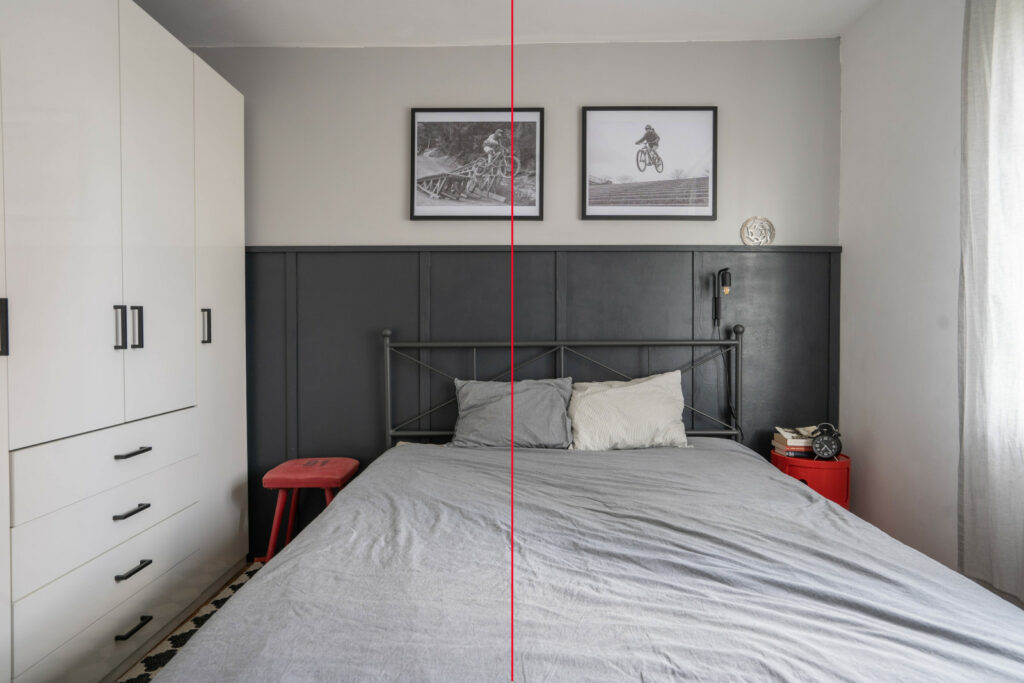 In photography however, symmetry does not necessarily mean that one side of the photo exactly mirrors the other one. It is rather about balance, and you will achieve balance through the placement of equally weighted visual elements in both sides of a photo.

Placing a main object at one third of the picture instead of in the middle often makes the photo more appealing (but remember the balance!). This can be applied eg.

By capturing two walls instead of three, the shot shows a good deal of the room, yet leaves enough to the imagination so as not to place constraints on a room’s size. If you picture three walls of a room then this will tend to look smaller than when showing only two. 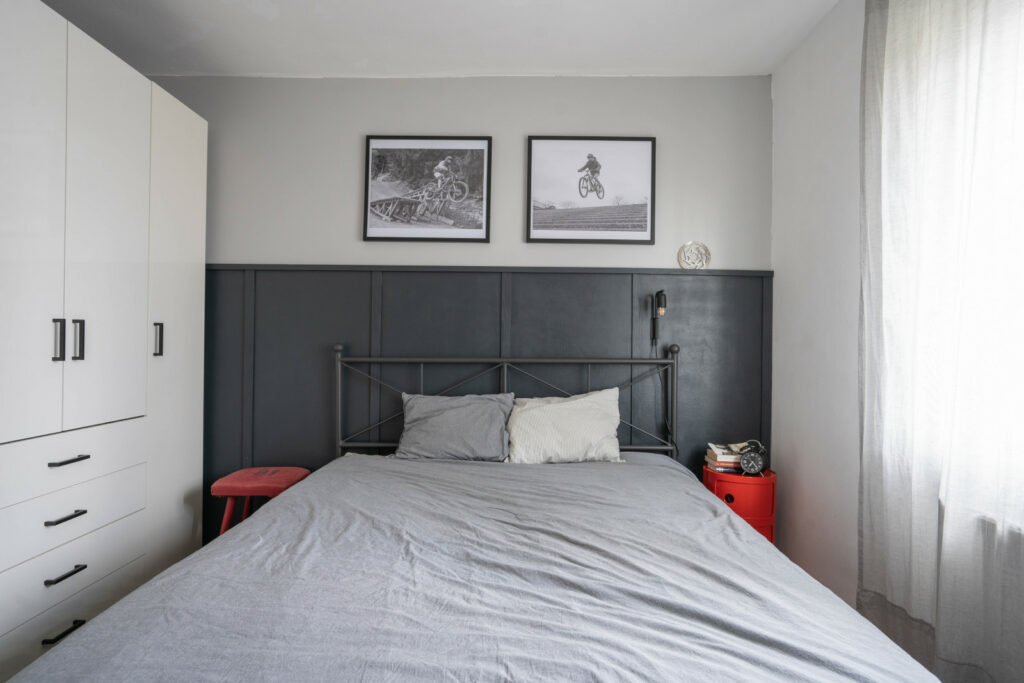 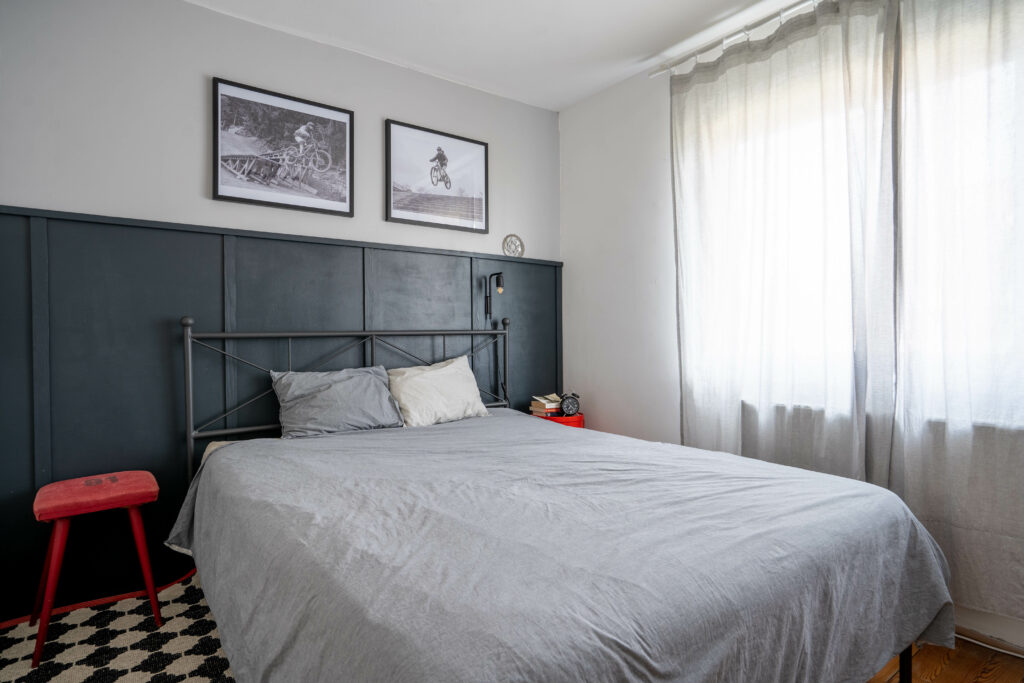 Make sure that there is enough light in the room for the camera to be able to get a good quality image. On many occasions you will see the colors in your pic deviating from the ones in the real setting. Without extra equipment this will be difficult to correct beforehand. However, many post processing apps offer white balance correction settings with which you can tweak your colours to look more realistic. If your device allows for RAW-shooting make sure it is activated as this gives you much more freedom to optimise your pictures in post processing. However, be aware that RAW format takes a lot more storage space.